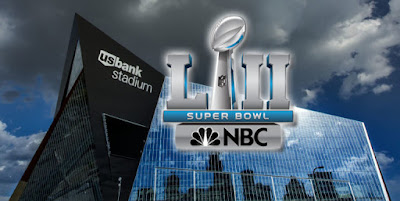 It is obvious that we have many beyond chance synchronicities associated with the upcoming Super Bowl LII. This data leads us to ask what does it all mean?

At the very least I believe the data is pointing us to this date and this location as a sign of pending major end times events. With its connections to the 9/23/2017 sign of the woman clothed with the sun and the halfway point of normal human gestation, plus all the other data, at the very least it is definitely a sign of the coming antichrist and coming judgment upon the USA. Although the alert level at Popocatépetl remains unchanged – Yellow – CENAPRED urges NOT TO APPROACH the volcano due to the danger of falling ballistic fragments after volcanic activity has increased again on January 30, 2018. A strong explosion occurred on Tuesday afternoon at 4:21 p.m. local time throwing ash 3,000 meters above the volcanic peak. Ashfall is expected for populations situated northwest of the volcano.  Read More…

According to local media reports, one minor girl died while nine individuals were injured as a house collapsed in Hub area of Balochistan, Pakistan. A school building has also collapsed in Peshawar and several children are feared to be injured, The Nation reports.  Read More…

UFO investigators are looking at all three sightings which occurred on January 13 after they were reported to the National UFO Reporting Center (NUFORC).
The first strange phenomenon happened at 12.45pm in Pasadena, California, when at least five “circular UFOs” were seen in the sky.
The unnamed witness said his cousin first spotted the alien objects and told everyone else in his family.
He said: “I looked up and in the sky I saw shiny dots in the sky. I observed the objects and then returned inside to get my iPhone to document what I saw.”  Read More…

An Amtrak train carrying Republican members of Congress to a party retreat struck a garbage truck outside Charlottesville, Virginia, on Wednesday.
A nurse on the scene reported at least one fatality and at least one person in critical condition after the crash, WVIR-TV, an NBC affiliate in Charlottesville, said on Twitter. The outlet did not specify whether the two were in the truck or the train, but Amtrak said there were no reported injuries on the train.
Two people in the truck appear to be severely injured, said Representative French Hill of Arkansas. “Everybody on the train is okay,” he said. “It was a very sudden jolt to the train, but the train slowed down and is still on the track when it came to a stop.”
Read More…

If catastrophe had struck during Donald Trump’s first State of the Union address yesterday, the US would seamlessly have had a new acting president: Sonny Perdue.

The Agriculture Secretary was chosen to be “designated survivor” and was hidden in an undisclosed spot — protected by Secret Service agents — in case the President, Vice-President, Speaker and more senior cabinet ministers perished.
Read more…
Also… CNN

I asked God about the mark of the beast. Below are snippets of what I believe He told me.
It’s not the first time I’ve asked this, but his response has been along the same lines: No matter how it is marketed, and it will be marketed in several ways, we are not take a mark on our forehead or right hand.
When I asked him what the mark was, he said it was advanced technology.
And the reason for avoiding the mark he said is not simply a question of obedience or allegiance. He actually emphasized that Christ came to seek and save the lost—the stubborn, the disobedient, the obstinate—to make it clear that receiving the mark went beyond the issues of obedience and allegiance. He said the reason for avoiding the mark is that it would change one’s DNA and render the person irredeemable.
END_OF_DOCUMENT_TOKEN_TO_BE_REPLACED