Be ready to be on the move, My People, for in these very end times as the persecution rises (he showed me in the Spirit it would rise like flames in a building fire), as it heats up, you will be constantly moving. END_OF_DOCUMENT_TOKEN_TO_BE_REPLACED

Last evening after my time of prayer with the LORD I went to bed.  I had a very alarming in the middle of the night. I felt such an urgency in my spirit that after I woke up in the middle of the night I wanted to sit in my computer and send out a prayer alert to the intercessors. However, I was so tired and drained that all I could do was write down what I had been shown so I would not forget the details.  I prayed against what I saw and went back to lie down. This morning, after having an opportunity to pray and collect my thoughts, I am posting this dream and sending out a prayer alert.  I had a series of dreams one after the other. This does not happen often, but whenever it does they are usually linked together.  END_OF_DOCUMENT_TOKEN_TO_BE_REPLACED

Pope Francis – who stands accused of covering up widespread sexual abuse within the Catholic Church, says that the devil is trying to divide and attack the organization. So apparently all of the child rape isn’t the priests’ fault, since the devil apparently made them do it.

NASA scientists have reportedly designed a way to avert a disaster which may threaten mankind’s continued existence – the threat of Yellowstone supervolcano eruption.

Brian Wilcox of the NASA’s Jet Propulsion Lab explained to BBC that the US space agency plans to “drill up to 10km down into the supervolcano, and pump down water at high pressure,” thus slowly extracting heat from it.

President Trump may have been too quick to praise North Korea following Secretary of State Mike Pompeo’s visit with Kim Jong Un over the weekend. Because in what will be remembered as a brutal snub, Chinese President Xi Jinping refused to meet with Pompeo during his visit to Beijing on Monday, while China’s foreign minister said in no uncertain terms that the US shouldn’t expect China’s help with denuclearizing North Korea.

In what the New York Times and WSJ described as a “tempestuous”, “public confrontation” where “the customary veneer of diplomatic niceties during public remarks” was stripped away, Pompeo and Chinese Foreign Minister Wang Yi traded barbs in public during a press conference as the two men blamed one another for the near-confrontation between US and Chinese naval ships in the South China Sea last month, while China criticized the US for perceived incursions on Chinese territorial sovereignty and the US’s willingness to sell arms to Taiwan (while providing support in other ways). Wang also blamed the US for “ceaselessly elevating” trade tensions in a way that “cast a shadow” over their relationship. 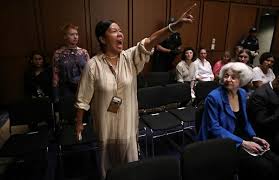 The bitter battle over Brett Kavanaugh’s nomination to the Supreme Court has exacerbated the nation’s political divide and left many Americans emotionally raw. It’s also given new definition to the high stakes of November’s election.

After a nailbiter of a Supreme Court nomination until the very last minute, angry Democrats have come out in force, vowing to extract revenge on Republicans with the nation’s top Democrat urging supporters to make Republicans “pay a price” for putting Brett Kavanaugh on to the Supreme Court.

Roberta Morrison Gilbert preaches that the battle field has come to the churches. The church needs to be fed not just entertained. Doctrines of demons preach there is no judgement, God’s word declares there is judgement. God wants to expose the bad people and protect His sheep.